Our partnership with King’s Ely started in 2017 when 20 of our youngest learners (8-10 year olds) from Italy attended the King’s immersion course. That education project turned out to be a great success! Consequently, in August of the same year, we were invited by the school’s senior management to get a personal feel of … END_OF_DOCUMENT_TOKEN_TO_BE_REPLACED

The PRODIREKT International Ambassador Program has been designed to assist students and parents as they embark on their search for the right language program, high school, university or college, as well as to ease students’ study abroad experience. Our International Ambassadors are students and alumni who share their first-hand experiences of the enrollment process, programs, … END_OF_DOCUMENT_TOKEN_TO_BE_REPLACED

In September, the representatives of PRODIREKT, together with a small selected group of other agents, were invited by Stonar, a leading UK boarding school, to be their guest for a couple of days and to visit their premises. Stonar laid on an exclusive coach to transport the group to the school. The guidance and care … END_OF_DOCUMENT_TOKEN_TO_BE_REPLACED

Whatever your language goals, we are committed to help you achieve them. Students, teachers and parents worldwide choose our Verbalists Language Network as their trusted guide for the finest in educational services and language travel. Enroll for English study abroad with us and enjoy the excitement, flexibility and dependability of an accredited organization and … END_OF_DOCUMENT_TOKEN_TO_BE_REPLACED

Schools & Agents (S&A) interview with Dejan Trpkovic, PRODIREKT, published on 27 November 2018: The Importance of Student Testimonials – An Agent’s Perspective In this day and age selling has become quite an aggressive business – be it the selling of tangible products as well as the selling of services. Education, is by no means … END_OF_DOCUMENT_TOKEN_TO_BE_REPLACED

Prodirekt translations conference services draw from our broad network of linguists who are competent in working with groups of any size and are adept in an exceptionally wide range of industry specializations.

Upon receipt of your inquiry our staff will listen to your requirements and discuss with you the various options available to suit your needs. We can make sure the simultaneous interpreter we provide you is not only a fluent and highly eloquent speaker of the necessary language, but also fluent in the specific terminology that will be used in the job, whether medical, technical or legal. We also endeavor to source the interpreter from as close to the client as possible so as to minimize transport costs.

When is whispered interpretation used?

What are the advantages and disadvantages of whispered interpretation? 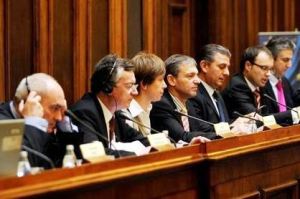 Conference: “Parliaments in a changing Europe: Citizens and representative institutions in modern governance”

During the two days of the Conference participants debated about the relations between parliaments and civil society, European and national dimension of citizens’ rights, strategies of governance and decentralization, inter-parliamentary communication and modernization of the parliaments, with speeches from high ranking officials from EU national parliaments and international experts.

The project is implemented by the Hellenic Parliament and the National Assembly of the Republic of Serbia.