Our partnership with King’s Ely started in 2017 when 20 of our youngest learners (8-10 year olds) from Italy attended the King’s immersion course. That education project turned out to be a great success! Consequently, in August of the same year, we were invited by the school’s senior management to get a personal feel of … END_OF_DOCUMENT_TOKEN_TO_BE_REPLACED

The PRODIREKT International Ambassador Program has been designed to assist students and parents as they embark on their search for the right language program, high school, university or college, as well as to ease students’ study abroad experience. Our International Ambassadors are students and alumni who share their first-hand experiences of the enrollment process, programs, … END_OF_DOCUMENT_TOKEN_TO_BE_REPLACED

In September, the representatives of PRODIREKT, together with a small selected group of other agents, were invited by Stonar, a leading UK boarding school, to be their guest for a couple of days and to visit their premises. Stonar laid on an exclusive coach to transport the group to the school. The guidance and care … END_OF_DOCUMENT_TOKEN_TO_BE_REPLACED

Whatever your language goals, we are committed to help you achieve them. Students, teachers and parents worldwide choose our Verbalists Language Network as their trusted guide for the finest in educational services and language travel. Enroll for English study abroad with us and enjoy the excitement, flexibility and dependability of an accredited organization and … END_OF_DOCUMENT_TOKEN_TO_BE_REPLACED

PRODIREKT group leaders represent a team of experienced professionals who themselves participated in language study and professional training programs. Furthermore, they were trained by partner colleges to assess, analyze and counsel a student; they also underwent Inspections & Inspector Training Course organized by EAQUALS (European Association of Quality Language Services).

The safety and well-being of young students is our top priority and that’s why all our groups are accompanied by an experienced group leader who looks after students’ welfare during their course attendance. 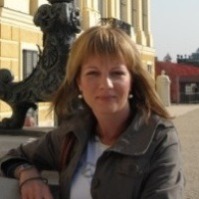 After completing her studies of the English Language and Literature at the Belgrade Faculty of Philology, Branka Stefanovic (born 1977) has been teaching in a private language school. During this time she has gained huge experience in teaching both children, students, young professionals and adults.

She is an active member of ELTA, the association of English language teachers in Serbia.

Click here to see Branka and her students in Oxford

Emilija Efremovska (born 1983) is a graduate psychologist, from the Faculty of Philosophy in Skopje. The affinities and interest for sports were the reason why she enrolled Postgraduate studies in Sports Management, at the University of Novi Sad.

During and after her studies, she attended many courses and training programs for personal development and psychological counseling. During her two years experience in the Centre for Social Works, in the Department of care for children and youth, she participated in the guidance, development and socialization of young people with social problems.

As part of an extremely large project of the Ministry of Education and Science and the World Bank, she participated in the development of the teaching program in schools, that led to an increase in the efficiency of the education system.

From 2006 until today, Emilija collaborates with several soccer clubs from Macedonia, focusing on the improvement of the motivation, control and confidence of athletes. She participated in several certified seminars organized by the Center for development, counseling and psychotherapy, as well as training for Counseling of children and youth.

In May 2011, she was trained to organize professional football camps for children and youth by the standards of FC Barcelona.

Biljana Keric (born 1978) is a graduated psychologist. During and after the course of her studies she took part in many humanitarian projects sponsored by the Ministry of Health, OEBS and the World Bank. Out of many such projects, the one she is particularly proud of is “The Hospital – A Friend to Children and Families”, sponsored by the Serbian Ministry of Health, which aimed at improving the conditions in children’s hospitals. She also participated in several certified seminars organised by the Serbian Association of Psychologists, as well as the World Health Organisation seminars on strategic communication planning.

In her free time Biljana enjoys traveling and hiking.

Ljiljana Aleksic (b.1955) graduated from Belgrade Faculty of Philology where she majored the English Language and Literature. She has been teaching English in Grammar School “Uros Predic”in Pancevo ever since, but she is also a renowned and prolific interpreter. She is quite proud of her translation of Charles Simic’s poetry.

Ljiljana loves to travel and for the past 30 years she’s been a much favoured group leader to teenagers improving their English in London, Oxford, Brighton, Cambridge, Windsor, Hastings… She admits that she can’t put the number to all the students she’s accompanied to summer schools in England, but if she’d been hard pressed to do it, it would be over 2000.

She is an active member of ELTA, the association of English language teachers in Serbia and a permanent court interpreter.

Click here to see Ljiska with one of the Verbalisti groups, attending our My London program.

Slobodanka Boba Gligoric (born 1978) graduated from the Faculty of Philology in Belgrade, majoring the English Language and Literature. Her special area of interest is Language Teaching Methodology in which she got her Master’s Degree and is currently working on her PhD. The research in this area led to publishing a course book for primary school learners in 2008 which was awarded the Golden Plaque in the category of study materials at the Belgrade Book Fair the same year.

Boba has been professionally involved in education as an English Language teacher and Director of Studies in a private language school, as well as a British Council teacher trainer in Central and Eastern Europe.

She is also an experienced group leader to teenage groups improving their English in the UK and German in Austria.

In her free time Boba enjoys reading, cooking and spending time with her friends who, on their part, enjoy her fabulously prepared food.

Zorana Bajic (born 1978), an English Language teacher, graduated from the University of Belgrade – Faculty of Philology. She is very fond of Jane Austen’s novels, which were the topic of her Master thesis. She teaches English in a primary school as well as in a private language school. She also translates. Zorana is an active member of ELTA, the association of English language teachers in Serbia.

Zorana is an experienced group leader to teenagers attending summer schools in England, as she’s been doing it since 2003. So far, she’s taken her students to Oxford, London, Cambridge and Stratford-upon-Avon.

She is quite passionate about tennis, which she plays recreationally. In her spare time she perfects her IT skills.